Three komiks... Three continuing series... Three sentences... I'd like to feature three I picked up during Komikons and Komikets.
SAGALA #1
Tori Tadiar's work won for Best Komiks during the Komiket Awards in 2017. Rightfully deserved since it's Filipiniana fantasy at its finest. There's plenty of maidens, baro't sayas, ternos, gunslinging, martial action, Guardia Civil, and other historical and cultural references to go around in this alternate world set during the Spanish Colonial period.
The Hotdog Prince volume 1
Francis "Kong" Martelino masterfully weaves a tale about a guy who loses his nose, mushrooms, Maria Ozawa, stepping on dog poop, and a giant anthrophmorphic meat sausage aptly named "The Hotdog Prince". I never knew you could use rubber slippers and backscratchers like that for immortal combat. Not for the easily offended and squeamish, though.

Carnal: Banahaw
Bambi Eloriaga-Amago, Olan Amago and BK Peña come up with a work that creepingly resonates with Philippine myths and monsters. Banahaw, a rockstar, and Cristobal, a man of the cloth, are brothers intertwined in a narrative where there's this slow and certain uneasiness with a damning realization that, yes, something outworldly is going to happen at some point in time. Waiting for the next installment Carnal: Cristobal. 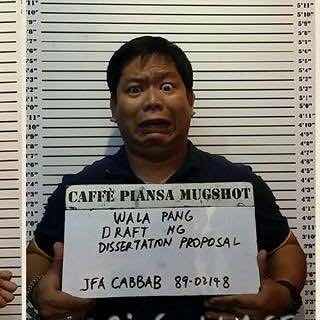 Johann Frederick "Igor" Cabbab is a librarian, archivist and full time faculty member of the UP School of Library and Information Studies. He was managing editor, writer and graphic artist for several anime, children and young adult publications prior to rejoining the academe in 2007. He is currently pursuing his Doctor of Literature and Philosophy in Information Science (DLitt et Phil) via distance mode at the University of South Africa (Universiteit van Suid-Afrika). He is old.
3x3 is a series of blog posts that features three books each with a review of three sentences long. For the month of January, the blog is featuring Filipino Librarians and their top 3 best reads of 2018. Read the first post here.
Thoughts in action by Zarah C. Gagatiga at Saturday, January 19, 2019