Last Friday January 18, 2008, Baby Alfonso (Acquisitions Librarian) and I went out on official business to Fullybooked Bonifacio High Street. There we selected books for our boys (from preschool to Gr. 7) and DVDs for the content areas. It was Baby's first time to see the 4 storey bookstore while it was my third time around. Being there reminded me of my visit to Singapore's Kinokinuya.

If only Philippine libraries are are as spacious and well stocked as bookstores like Fullybooked and Kinokinuya, then, it will attract readers by the hundreds. But who will risk investing millions on libraries? Wanted: Philantropist!

Awards and recognitions are feel good instruments that either blow the ego or humble the spirit to continue doing a job well done. In the Pinoy blogosphere there is the Pinoy Blog Awards, an anual event recognizing the best and the brazen bloggers in the country. Then there is WikiPilipinas who honored some bloggers who made waves and caused an impact in the realm of Pinoy blogopshere last year. And are we (Filipino Blograrians) not proud of Von Totanes whose blog was named as the best in the catageroy of "communities" by WikiPilipinas? Of course we are. But the thing is, Von is still baffled.

What baffles me, on the other hand, is the exclusion of education as a category in the list. Could it be that every blog out there has educational value depending on who the reader/user of the blog is? Or is it because blogs for education, on teaching and instruction and about the academe are complicated to judge since judges would require, in the first place, theoretical knowledge on pedagogy and instructional technology? Blogs for teaching goes beyond the design factor. Besides, blogs used as teaching tools are not set up as popularity portals. Does the education sector have to set up its own blog awards to acknowledge the effective and eficient use of blogs in teaching and instruction?

Such musings led me to check some links via the IASL blog. There I found the edublog awards! The categories range from best teacher blog to best librarian/library blog; best educational wiki to best educational use of social netwroking services. From the list of categories, I have the impression that in the US, bloggers and educators alike have a progressive and advanced perspective on the utility of blogs as educational tools. Can the Pinoy blogsophere come up with something like it?
Thoughts in action by Zarah C. Gagatiga at Thursday, January 24, 2008 No comments:

There is a new book company in town.

Sta. Maria & Kelly , Inc. was launched last December 14, 2007 carrying a variety of tiltes for preschool children to college students and professionals. Librarians were present to grace the occassion and the grand dame of the Board for Librarians, Madame Cora Nera, was there to lend an inspirational message to Mr. Mario St. Maria, the president-owner of SMK, Inc. His family was there to support him in this momentous event.

Mario Sta. Maria started out as an agent of various books, journals and periodicals to schools and libraries. With patience and perseverance, he was able to establish a niche as manager of Library Journal Solutions, Inc. As head honcho of SMK, Inc. he envisions a meaningful partnership with clients. In the future, he plans to help libraries in the province grow into vital learning centers. This initiative to give back is fueled by his humble beginnings as a student of Library Science at the University of the East.
Thoughts in action by Zarah C. Gagatiga at Tuesday, January 22, 2008 No comments:

Here's an add from Nono Pardalis, KUTING and writer for ANINO, who sent it via email.

ANINO Shadowplay Collective will be performing at the UP Film Institute (in Diliman) on 25 January 2008, 7 pm.

I've included the link to the website and it will give the reader a comprehensive profile of the group. What struck me was the list of places and venues they have performed so far. They have been to schools, museums, malls, plazas and cafes but not to a school or public library yet. So, librarians in schools and communities, any takers? Check the website now for the group's contact numbers. There are videos to watch and other downloadable stuff for your perusal.
Thoughts in action by Zarah C. Gagatiga at Tuesday, January 22, 2008 No comments:

Filipino Librarians In The News

I found this while reading Ruel De Vera's review of Kenneth Yu's Philippine Genre Stories in the PDI. Follow the links to read the names of the Filipino Librarians who will be getting some awards from PAARL.

I hope next time, the press release would include what the awards are for and what accomplishments the awardees have contributed to Philippine and International librarianship. Young librarians like me need models to look up to. Besides, non-librarian readers would be informed of the work that librarians truly do in the academe, in research and in government service. I do not like to think that the motive for giving awards, either in the field of librarianship or another, is given with a political agenda.

But this is the Philippines. We're Filipinos. We're either political or personal.
Thoughts in action by Zarah C. Gagatiga at Monday, January 21, 2008 1 comment:

The Future of Reading

I am culling out memorable and relevant posts I made in 2006 and 2007 to file them under the BEST of SLIA - an annual compedium of blog posts that, I deem, contain valuable information for me and my readers. But it seems that going over 200 plus posts for two years could not be done in a week. So here is a reprieve from my scouring -- an editorial by Shiela Williams on Harry Potter and the Future of Reading.

In the article, Williams mentioned of a lovely librarian (envy! envy! envy!) who accepted the Hugo Award on behalf of JK Rowling. Why would a librarian, and take note that she was described as lovely (images of loveliness come to mind- no thick intimidating glasses; gone are the dagger like stares; hair in a bun? go away!), accept the Hugo for JK Rowling? Ah. I am inundated by so many assumptions. But, I must say that I'm contented to think that indeed, librarians are not mere custodians of books. See, they attend events like book awards and book launchings where their presence is very much appreciated. Librarians do have a role on everything books and reading and not just the keeping of such.

The most thrilling bit of information I got from Williams' editorial though, is her belief that the printed word will never die. And proof of this is the phenomenal reception of kids and adults to JK Rowling's seventh Harry Potter. If you think otherwise, I challenge you to shrug off your snottiness on the HP books and read it.
Thoughts in action by Zarah C. Gagatiga at Thursday, January 17, 2008 No comments:

The celebration of the holidays, Christmas and the New Year, is steeped with traditions. For this, I am keeping in line with traditional blog posts in review of the year that was. Here are the first twelve posts I made per month for the year 2007. It's time to look back with expectations straight ahead for 2008. This month of is after all named after Janus, the god of gates and doorways, of endings and beginnings.

October 2007: On the Blog Trail of Filipino Librarian
Whew! I finally get to squeeze this in or else, be stuck in September. I have several blog posts in line for this week, but Von's recent posts are just too delicious to follow.

July 2007: The State of Philippine Children's Literature
There is this article in PCIJ on the state of children's literature in the country.

June 2007: Misplaced Librarians
There were many insights and issues that surfaced from my seminar-workshop with public and barangay librarians yesterday at the Filipinas Heritage Library.

May 2007: Hudhud Epic for Kids
Two new children's books have been published by the National Commission for Culture and the Arts (NCCA) to teach children about the Ifugao epic, Hudhud.

April 2007: Mentor vs. Supervisor
One of the many adjustments I made upon assuming the role of Library Coordinator, was that of a supervisor in charge of evaluating the library staff. 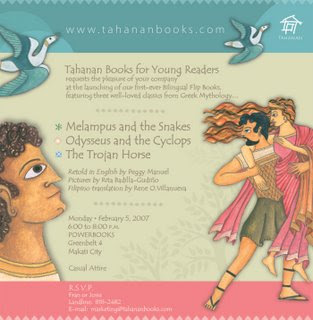 I delight in knowing that people outside the Philippine borders are discovering my blog. Once in a while I would get emails from people telling me of their discovery of SLIA via the blogosphere. This morning, I got an email from Corrine Robson who runs the Paper Tiger Blog.

She has great interest on multicultural books and events on children's literature in the Philippines that she asked of these in her email. PBBY will be celebrating the 25th National Children's Book Day this July so I made mention about it when I emailed her back. This goes to show how blogs and the Internet can help people from different places bridge gaps and get information. The world is indeed becoming smaller, but all the more richer it's been. Barriers are broken down; new meaning and world views are constructed.

Cheers to an exciting blogging year ahead!
Thoughts in action by Zarah C. Gagatiga at Tuesday, January 08, 2008 No comments:

Of course, greetings and wishes of a happy and prosperous New Year filled my inbox, in email and in mobile phone, yesterday and the other day. Text messages from friends and family were a plenty. Most SMS I got from them contain names of kids and spouse, so I was amused when writer-friends, Augie & Mike Rivera, sent me a New Year greeting bearing the name of all their storybook characters from Benito to Elias, Sibuyan to Ampalaya, Segunda to Lea.

Another amusing SMS came from my mother. It goes like this:

May the fleas of a million dogs infest the butt of the person who spoils your year and may his arms grow too short to scratch his back.

You don't my mom, but I do so the context of the message is beyond humor and a few good laughs. I have always found her to be wielding a magic all her own. Receiving the SMS gave me goosebumps upon complete comprehension of it all. Speaking of magic, Neni SR Cruz, PBBY co-member, sent one fantatsic SMS that she got from writer Neil Gaiman --

May your year be filled with magic and dreams and good madness; I hope you read some fine books; and kiss someone who thinks you are wonderful; and don't forget to make some art - write or draw, or build or sing or live; And I hope, somewhere this year, you surprise yourself!"

I think I will just do all of that for 2008 and the years to come. I never know, really, I might just surprise myself this time around.
Thoughts in action by Zarah C. Gagatiga at Wednesday, January 02, 2008 1 comment: