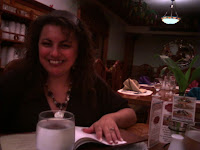 International storyteller and writer, Dianne de Las Casas was in town last March 10-12, 2008. I had the honor and the pleasure to have had dinner with her last Wednesday. I missed her workshops in the Development Academy of the Philippines and Lourdes School, Mandaluyong, but I was able to touch base with her Wednesday night.

She is more beautiful than ever; still the vivacious and warm person I met in 2006. She has a lot of love to give and it endeared her to the many Filipino teachers and librarians she met in her workshops.

It was last year when I met public librarians from the Pasig City Library. I had a seminar-workshop for the Filipinas Heritage Library and the National Book Development Board in June 2007 and it was for public librarians.

I promised myself that I will visit the new library. I pass by the building every morning when I go to work. The good thing about it is that, the public library is just beside the Pasig Central Elementary Scool. This means that the city government considered the location of the library as a means for easy access to children who are learning to read. It turns out that it was being renovated. It will not open until May 2008 which means, I will have to wait three more months to check it out with my kids.

The public library in Pasig City was a popular students' destination in the 80's and early 90's. Through the leadership of the great Pilar Perez, the public library in Pasig became a research and learning center for chidlren and teens. I remember my teachers in Pateros Catholic School encouragng us to go and do our research there. I did use the resources of the Pasig City Library once or twice, but I never saw or met Pilar Perez. She will remain in my memory though as one librarian leader in the field of Children's and Young Adult Library Services.

The public library, at that time, was used to be housed in the villa very near the Pasig Cathedral. That villa is now the city's museum. But, before that, a strange looking warehouse along A. Mabini St. carries a sign that reads " Rizal Provincial ---ary". We can only speculate if it was indeed the first location of the Pasig City Library.

Thoughts in action by Zarah C. Gagatiga at Thursday, March 06, 2008 No comments:

A Reply from "The Man of Many Stories"

Kenneth Yu, Xavier Alumnus and editor of the Philippine Genre Stories replied to my post via email. I know it will embarass Kyu once again, but I just could not help posting parts of his email here in SLIA simply because, it is a testimony to the wonderful influence that a school library could give a young boy growing up reading.

So, Kyu, I beg your pardon if I have violated your privacy. Accept that you've become a celebrity in your own right. As a Xaverian, you're meant to shine!

...in your last paragraph you said something about the library. I loved that place, and not just for the aircon (though that played a big part). I could get lost among the books for hours with my friends. Thinking of that place always makes me smile, and I think that early love still shows itself today whenever I go to any library, or any bookstore, or any place where there's a large collection of books... I hope you have boys who like spending time there too. Be patient with them, please, no matter how crazy they become. I have a feeling (that) that's exactly how we were a long time ago. (Just make sure that they're not crazy for craziness' sake, but are also borrowing books to read.)

Thanks for this, Kyu! You made my work sound so significant.
Thoughts in action by Zarah C. Gagatiga at Tuesday, March 04, 2008 1 comment: 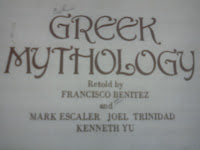 It happens all the time. When a teacher learns that his/her former student achieved something, be it big or small, he/she is bound to bask in the glory of the accomplishment. So I was not surprised when Mr. Paco Maramag (who taught English and is now Prefect of Discipline) came to the library one morning looking for a very “old” book. 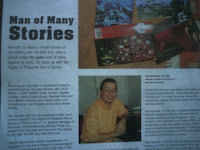 The book he was looking for was a project made by his former grade 4 students way back in 1980. It was an anthology of Greek Myths written and compiled by Francisco Benitez, Mark Escaler, Joel Trinidad and Kenneth Yu. What prompted him to go to the library was the article written by Ruey de Vera in the Sunday Inquirer about a Man of Many Stories. It so happened that the man featured in De Vera's article was Mr. Maramag's student. He is none other than Kenneth Yu (otherwise known in the LitCritters Open as KYu), publisher/editor of the Philippine Genre Stories.

What's more amazing is that, Kenneth Yu is remembered fondly by one of our GS Librarians. Mrs. Rosario "Baby" Alfonso, back then she was Ms. Cahanding to Kenneth and his friends, could attest to KYU's addiction to books and reading. Such boys with an appetite for reading are never forgotten. At that time, Xavier School was still following the Individualized Instruction Approach and Methodology. Students could chart their own learning through the facilitation of the teacher. Mr. Maramag had given KYu's group the liberty to come up with the anthology of Greek Myths.

The book is still in our Filipiniana Collection. It stands proud among the classics written and produced by Filipino writers. Anyone of course can come up with such a project. But teachers and librarians consider this as a milestone in a student's literacy development.

I meet Kyu once in a while during Open Sessions of LitCritters. The last time we met, I mentioned to him his little project in grade school. He was embarassed to bits when I told him about Mr. Maramag's quest. Then again, the Man of Many Stories had to start somewhere. And like his former English teacher and GS librarian, I'm proud that his early beginnings at writing, editing and publishing began in school and nourished in the library.
Thoughts in action by Zarah C. Gagatiga at Monday, March 03, 2008 1 comment: