A printed and bound volume that explicitly states it is for children and/or young people, hereby understood to refer to those falling within the ages 0-19 years. These include works like fiction (e.g. storybooks, young adult novels, fantasy, science fiction), non-fiction (e.g. poetry, biographies/autobiographies, developmental books, reference books, board books, bath books, pop-up books, how-to books, etc.), picture books (wordless or otherwise), graphic novels or comic books expressly labeled for children. At this time, the awards do not cover electronic books or textbooks.

A book is eligible to be nominated and considered for the NCBA if it is:

b. Authored by a Filipino citizen;

c. Written in Filipino, English or any other Philippine language specifically included by the PBBY and the NBDB for a specific year;

i. Delivery receipt/s to a bookstore, or a dealer/jobber, or any similar entity that has the ability to distribute books to the public;

iii. Distributed in book stores or entities that sell the book, including online distribution, proof of which should be provided;

iv. Produced/printed by a book facility/entity, as shown by a document that said book has been produced in quantities consistent with the act of publication. It is, however, understood, that the specific number of copies shall not be part of the criteria to determine the books to be selected for the Awards.

Anybody whether publisher, author or illustrator may nominate a book for the NCBA, as long as the person or entity is registered with the NBDB as a publisher, author or illustrator. The nomination form duly accomplished and signed by the nominating party shall serve as the official letter of nomination and shall be submitted to the NBDB at the address below together with the books, at one form per nominated title. The number of copies to be submitted for consideration will be based on the number of judges plus one copy each for NBDB and PBBY. This year, there being five (5) judges, the number of books to be submitted shall be seven (7).

After documenting the submissions, the NBDB shall submit nominated books directly to the members of the Board of Judges.

a. The BoJ shall select a maximum of ten (10) titles from all the nominees, without any further ranking the titles, to be proclaimed as the recommended reading titles. The BoJ, on the other hand, is not obliged to select any minimum number of recommended titles, should it not find any nominee deserving of recommendation.

On July 2012, the National Book Development Board (NBDB) and the Philippine Board on Books for the Young (PBBY) will present the 2nd National Children’s Book Award, giving honor to the 10 best books for children and young adults published during the years 2010 and 2011.

All publishers, authors and illustrators are invited to submit their nominations. Deadline for submission of nominations is January 31, 2012. For the full copy of the rules and to download the nomination form, go to HYPERLINK "http://www.nbdb.gov.ph" www.nbdb.gov.ph 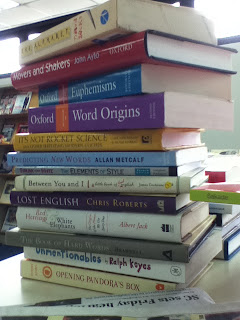 Thoughts in action by Zarah C. Gagatiga at Tuesday, November 29, 2011 No comments:

I found this great link in the Scholastic website that is useful when introducing the work librarians do to younger children. It shows that librarians work with people and assists them in their use of books and the internet. Story time is given importance as well as the feedback which librarians need from readers and users of the library. It goes to show that readers services does not end at the circulation table.

Early on, children can be introduced to the roles that librarians play in the learning community. This would aid in strengthening their concept of books, reading and literacy and that, a librarian is in the middle acting as conduit, support agent and teacher. This builds up to developing a library culture in the long run.

Readers services is a marathon. Starting it young and following through the higher grades, moving up to high school and then college is a long haul. This is the essence of children's library services - to address their literacy and reading needs as early as possible.
Thoughts in action by Zarah C. Gagatiga at Tuesday, November 29, 2011 No comments: 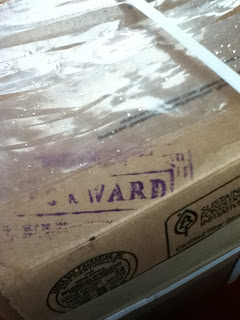 I presented my parcel's receipt. Followed the line to the receiving area. Paid forty pesos and waited until the clerk brought the box out. One guy examined my parcel note.

Guy 2 examined the box. Looked at me and took the parcel note from Guy 1.

I lifted my box of books and went out the post office happy that I didn't pay a big amount of tax but a bit dismissed at the clerk's reaction.
Thoughts in action by Zarah C. Gagatiga at Monday, November 28, 2011 No comments:

Library Designs to Die For 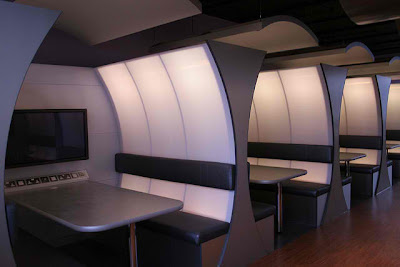 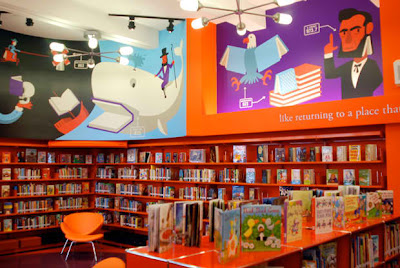 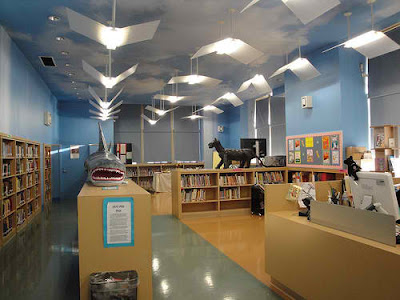 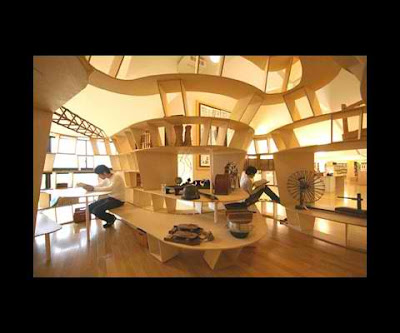 From John Williams, Australia
Thoughts in action by Zarah C. Gagatiga at Wednesday, November 23, 2011 No comments:

I have heard and read about curating online content late last year via blograrians who attended the annual American Library Association Conference. Another interesting topic discussed in the conference was that of transliteracy. That would be for another post. Plus, there's 21st Century Literacy to think and ponder on (though AASL - the Association of American School Libraries, has published a set of standards. In Manila, we are still struggling with Information Literacy and its application in library services and programs).

While curating online content may sound like a new invention for the librarian, it is very much similar with organizing information, a task librarians are so adept at. It is also another way of archiving.

Over the past few weeks, I've been exploring curating online content and it is not only done by librarians. Then again, since the likes of us are in the business of information service, I find it relevant to learn more about online curating. For starters, Librarienne has written about it. Karen Bonanno a librarian from Australia curates online. I am subscribed to her School Library Advocacy. What a way to be updated! Subscribing to her curated feeds is one of the many simple ways to grow professionally.

The New Zealand Library System has started a web curating tool. Scoop It! crawls the web for your online curating. Robin Good emphasizes the value and authority one can derive from online content curating. The tools and the-how-to-do-it tips are available online. As for me, I'm starting and experimenting on curating, applying the technology in library work.

Let's see where it will end up!
Thoughts in action by Zarah C. Gagatiga at Friday, November 18, 2011 No comments:

Thanks to David Cabanero, PLAI PRO, for sending these useful links! Now that the PLAI Congress is just around the corner, it would be great if we could all pitch in, lend a hand a do our bit to spread the news.

To be updated with the PLAI activities, check this out: PLAI Blog

To know more about PLAI, please visit us at: PLAI Website
Thoughts in action by Zarah C. Gagatiga at Thursday, November 10, 2011 1 comment: 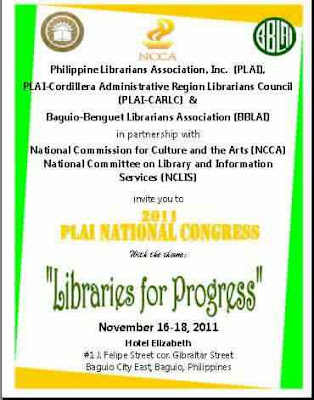 Thoughts in action by Zarah C. Gagatiga at Tuesday, November 08, 2011 No comments:

This is a response from Coralie Clark's article on the under-used school library in the International Baccalaureate Program. Written in 1995, it is a prophetic article that has great relevance in this day and age. Thanks to Stacey Taylor for the link!

Librarians face many challenges and concerns as technology changes and the learning landscape spurs many and varied pedagogical paradigms. Flexibility, competent communication skills and creative management strategies are required of the librarian. Thus, continuing professional growth is necessary to adapt, survive and thrive in the profession. Relevant to this is the formulation of action research or evidence based practice in the library.

Some evidences that a librarian can use are the following:

a. Circulation statistic and report. This would generate information on the profile of readers and their information behavior which could later indicate strong and weak areas in the collection.

b. Teacher and school librarian partnerships. Such collaborations must be documented, reflected upon, evaluated and become sources of theory development that will further enrich the practice of the profession. The participation of teachers in the selection and acquisition of library resources is one partnership that carry strong evidence that libraries are well utilised.

c. Identified library services that answer Independent research, reading and use of library resources. What library services, traditional or Web 2.0, answer the information needs and behavior of students, teachers and the learning community at large?

d. Community related activities. Other than internal library functions, there should also be opportunities for the librarian to join consortiums and forge interlibrary loan conditions with libraries in the community.

A saying from the olden days, no man is an island, is so befitting for this generation's librarian.
Thoughts in action by Zarah C. Gagatiga at Monday, November 07, 2011 No comments:

From the Philippine Association of School Librarians (PASLI) --

The Philippine Association of School Librarians, Inc.(PASLI) is
inviting you to the seminar-workshop on ‘Developing and Teaching
Information Literacy in School Library Media Centers’ on January 27,
2012 from 7:00am to 3:00pm at the Information Resource Center of C&E
Publishing, Inc. located at 839 EDSA South Triangle, Quezon City. A
benchmarking visit to a nearby Film Archives is being arranged for the
3:00pm to 5:00pm slot.

The seminar-workshop aims to help school librarians, media specialists
and personnel working in both public and private school libraries to:

1. Upgrade the information skills of school librarians and media
specialists.
2. Gain more relevant and meaningful strategies in teaching
information literacy to the school-age children of the 21st century.
3. Find and use creative ways of handling/presenting information
sources to their school LMC users.

Resource speakers in the seminar-workshop are Mr. David Birchenall,
the Director of Media Services of the International School-Manila and
Mr. Marion Jude Gorospe, the Library Media Center Supervisor of Miriam
College High School. Mr. Birchenall will give a presentation on the
theme: Developing Information Literacy Skills for School Librarians.
Mr. Gorospe will facilitate a workshop on the theme: Teaching
Information Literacy to School-Age Children.

Registration fee of Php 700.00 per participant will cover expenses for
seminar kit, certificate, 2 snacks and lunch and other administrative
expenses. Only sixty (60) participants may be accommodated in the
venue. Reservation is required to ensure a slot.

Thank you. Hope to see you in the seminar-workshop. 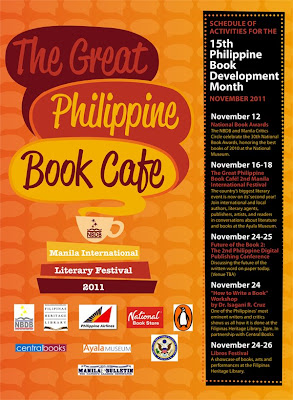 Thoughts in action by Zarah C. Gagatiga at Saturday, November 05, 2011 No comments:

I will be guesting on radio on November 9 2011 at the program LibRadio, DZUP 1602. The show starts at 12 noon and will run for about an hour. The program is in coordination with the UP School of Library and Information Science. It's on its second season now and counting. 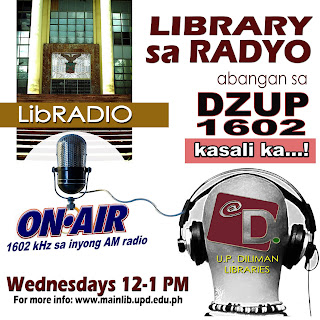 I will be interviewed about children's library services particularly so the long weekend will allow me to prepare for this. It's also a good chance to promote Tales From the 7,000 Isles.

Thanks to Madame Elvira Lapus for sending in the invite and Ms. Yani Ramos for the guide questions.
Thoughts in action by Zarah C. Gagatiga at Friday, November 04, 2011 No comments:

Picture books are for all ages! Go to the website here. Read an article in School Library Journal here. 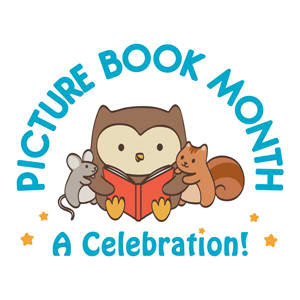 Thoughts in action by Zarah C. Gagatiga at Tuesday, November 01, 2011 No comments: