Being cited in another blog or website is like a pat on the back, well, if the citation is followed by kind and generous words. SLIA is mentioned in Filipina Soul and it validates the very reason for this blog's being.

I should put back Jonas Diego's YAN ANG PINAY logo.
Thoughts in action by Zarah C. Gagatiga at Saturday, December 29, 2007 No comments:

SCBWI Philasis presents --
Lara Saguisag on "The Filipino Child and Filipino Children's Literature"
When : 6 to 8 pm Monday 2008 January 7
Where : Fully Booked, Bonifacio HIgh Street, The Fort At The Forum on the 4th level, right on top of Starbucks
Host : Society of Children's Book Writers & Illustrators

Lara Saguisag will explore notions of childhood and "Filipino-ness" in Philippine literature for children, and will focus on locally published books. She will talk about different elements of the book, such as style, subject choice, book covers, and even cost of books, and see how texts and illustrations reveal our conception of children as subjects and readers.

Bio : Lara Saguisag's most recent book is Children of Two Seasons: Poems for Young People (Anvil). She
also co-edited Nine Supernatural Stories (UP Press) with April Yap. Her poems for children received the 2006 New School Writing Program Chapbook Series Award. She is a Presidential Fellow at Rutgers University, where she is completing her PhD in Childhood Studies. She is a founding member of KUTING (Kwentista ng Mga Tsikiting), a group of writers for children.

This event is open to SCBWI members and non-members, published or unpublished writers or illustrators for children or young adults, and those who have a keen interest in children's literature.

KUTING Workshop: The Art of the Magic Weavers.

KUTING Workshop: The Art of the Magic Weavers

Resource persons are: Dr. Luis Gatmaitan, Prof. Heidi Abad and Ms. Lara Saguisag. This shall be held on January 12, 2008, at Room 204, College of Education, Benitez Hall at U.P. Diliman.

December is a month that would leave me confused and crazy. All work and deadlines seem to snowball at the last month of the year and on top of it all is the perfunctory celebration of Christmas. Every year, I find myself dutifully going through the motions of preparing for parties, parties and more parties. At last, on Christams day, I take a sigh of relief to finally have accomplished something far more important. That is, to celebrate Christmas simply and more meaningfully.

I did go Christmas shopping but my budget was so tight, it could rival Scrooge's. No, I did not go around work and home scolding people "Bah! Hambug!". Instead, I greeted them with smiles and cheers inspite of and despite of. So here are pictures from a very busy December. I thank God, why despite of my miseries and problems, I still could manage to be grateful. To read the captions, just lead your cursor to the picture.

Thoughts in action by Zarah C. Gagatiga at Tuesday, December 25, 2007 No comments:

Award winning fictionist and essayist, Ian Casoscot wrote a paper on Literary Blogging. It's a neat feat for Ian who was only given ten minutes to present it during the Philippine Center of International PEN's 50th Anniversary at the National Museum last Saturday, December 8, 2007.

The question now is, what is blogging to Filipino Librarians who blog?
Thoughts in action by Zarah C. Gagatiga at Monday, December 17, 2007 No comments:

Writer Lara Saguisag and I are cited at Web Watching with Zoe. And Von's Filipino Librarian was mentioned too.
Thoughts in action by Zarah C. Gagatiga at Thursday, December 13, 2007 No comments:

The Boy Who Touched Heaven 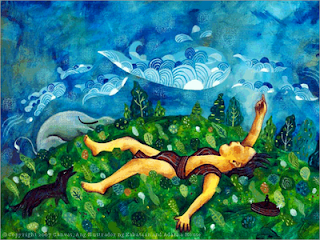 When Heaven Is Close Enough To Touch
By Zarah Gagatiga

So the saying goes that a picture paints a thousand words.

Last year, CANVAS, a non-stock, non-profit organization dedicated to promoting awareness in appreciation of Philippine art, culture and the environment, and Ang INK (Ilustrador ng Kabataan ), the first and only organization of Filipino illustrators for children in the country, selected artist and illustrator Sergio Bumatay III to render a painting that would serve as the inspiration for an original children’s story that would celebrate Philippine environment and culture.

Bumatay’s piece was then used to call on writers from all over the Philippines to enter CANVAS’ first Elias Dakila Chidren’s Storywriting Competion on Environment and Culture.

With a little help from the eighth Wonder of the World – the Banaue Rice Terraces Iris Gem Li, a young Business Adminstration student from the University of the Philippines, was adjudged the winner as she shaped a story about an Ifugao boy who dreams of touching heaven. Smitten by the heavenly bodies that adorn the sky during the day and at night, the Ifugao boy thought of ways to make his dream a reality. Li’s telling of the young Ifugao’s adventures and mishap is both funny and ridiculous. Child readers would find this appealing since their natural response to humor is still unblemished by life’s ironies and realities. The young Ifugao is the epitome of every child, curious, daring, irrepressible, unafraid, makulit.

Aptly titled as The Boy Who Touched Heaven, the story goes beyond the fulfillment of a young boy’s whim and fancy. It resonates to older readers as well, particularly to adults because; it carries a theme that bespeak one of life’s many tenets – that what we perceive as an unreachable heaven is right in our very own home. Indeed, finding one’s happiness and rediscovering the simple but lasting joys that family and home can offer is as close to touching heaven.

Apart from the theme, the humor and the plot that is easy to follow, and the storybook is truly a delightful read because of the cultural elements presented in the colorful and playful illustrations of Bumatay. Readers, young and old, need to know and see more of the country’s ethnic tribes, their children and their culture, for they are part of what makes this nation great. Bumatay‘s colors are as vivid as the brave Ifugaos’ woven cloths; as alive as the region’s dangerous, but beautiful landscape. The artwork’s authentic detail further enriches the cultural experience as he included little items that are unique to the Ifugao such as the necklace of beads, the nose flute and the ornament worn on the head by male Ifugaos.
Here’s looking forward to more culturally inspiring stories in the future.

CANVAS, now in its third year of advocating Philippine culture and the arts through books with stories written and illustrated by some of the country’s best young artists and writers, co-published The Boy Who Touched Heaven with Adarna House, the leading publisher of storybooks for children today, and Ang INK. The story may be read online at the CANVAS website (www.canvas.ph), and is available in bookstores nationwide.

Zarah Gagatiga is a school librarian. She is currently the coordinator of the Grade School Learning Resource Center of Xavier School. She is a board member of the Philippine Board on Books for Young People (PBBY) representing the sector for librarians. Visit her blog at http://lovealibrarian.blogspot.com.
Thoughts in action by Zarah C. Gagatiga at Tuesday, December 11, 2007 1 comment:

The children's literature industry in the Philippines gave a loving and memorable tribute to Mr. Rene O. Villanueva last night at Sanctuarium. Read Augie Rivera's eulogy here and get a sneak peak of highlights of the tribute here.

Goodbye, Rene! It is now up to us, those you've left behind, to continue your legacy.
Thoughts in action by Zarah C. Gagatiga at Monday, December 10, 2007 No comments:

The Passing of a Magic Weaver

He has 20 Palanca Awards to his name; honorary member of KUTING; and a TOYM and TOYP awardee. He was 53 years old.
Thoughts in action by Zarah C. Gagatiga at Friday, December 07, 2007 No comments: