Right after my PBBY seminar-workshop, I'll be running to Vibal Publishing House's booth in the Manila International Book Fair. See you there on September 13, 2008 at 10.45 pm!

The Living Library: Promotions and Marketing Strategies to Keep the School Library Alive

The seminar presents a slew of fun and exciting activities, projects and ideas that will keep students and teachers in utilizing the school library. Participants will be exposed to making a PR Plan and Readers’ Services Program that will lead to a visible library deemed by the school administration as a very important academic department.
Thoughts in action by Zarah C. Gagatiga at Sunday, August 31, 2008 No comments:

The PBBY has a line up of workshops during the Manila International Book Fair on Sept 12-16, 2008. Visit the PBBY website for more information. If you're a teacher, parent, writer, poet, illustrator, storyteller or literacy advocate, you'll find a workshop/seminar of interest.

For librarians, three seminar/workshops are on schedule for September 13, 2008 at SMX, Pasay City.

I do not hope to amaze and dazzle. But, I will be inviting participants to identify the variety of changes that occur in today's libraries - from manpower and staffing; structures and systems; analog to digital resources; attitudes and paradigms; roles and expectations. After this, they will be given opportunities to look at themselves and their response to changes through the Emotional Quotient Approach.

Honestly, this is a new module that I've designed in the summer. My motivation sprang from the trials, struggles and challenges I've experienced so far as a school library coordinator. They were far from pleasant, but not at all bad. Something has to rise from the ashes and I invite you to join me in setting the phoenix aflame.

See you there!
Thoughts in action by Zarah C. Gagatiga at Sunday, August 31, 2008 No comments:

After re-reading Half Blood Prince and Deathly Hollows last month, I took a break and browsed through some professional books. The call of fiction is stronger so I borrowed a friend's copy of Twilight. I have heard friends gushing about the book. Some colleagues asked if our library has a copy. Just last night, I've finished reading it and I'm contemplating whether recommending the book as part of the library's growing Fiction collection would benefit our Young Adult readers (mostly boys).

The conceit (or theme) is seductively intriguing.

Carlisle Cullen and his coven of vampires has, for decades, mingled and lived among humans with a good amount of success. What with the Volvo, Mercedes and Four Wheeler Jeep that his "children" drive to school, Carlisle Cullen did not spend three centuries sleeping in a coffin by day and sucking human blood by night. He is cultured, educated and a practicing medical doctor in the rainy and sleepy town of Forks, Washington. His family includes Esme, who is the known and recognized wife of Carlisle, Rosalie, Alice, Emmet, Jasper and Edward, the "adopted" kids of the Cullens.

For a while, the Cullens lived as normal as any humans in Forks, but with an observed distance from the rest of the community. Their wealth, beauty and mysterious aura were reasons enough for the common folks to shy away from them. One day, Bella Swan arrived from Phoenix, Arizona and muddled the secured routine of the Cullens as well as their life style. Edward, the youngest of the Cullens, was the most affected. The two fell in love and the rest, as they say, lived happily until the last chapter of the novel.

The author, Stephenie Meyer, has written two sequels of Edward's vampiric saga, New Moon and Breaking Dawn (there are two more actually, but the titles escape me as of writing). Words from the grapevine on the sequel render mixed reviews. I'm not surprised. Twilight is juicy and chewy, but that's all there is to it. It did not nourish nor fill me up. Clearly, at least to me, it is no comfort food.

The romance between Edward, a vampire, and Bella, a human, is scintillating but I doubt if this would be enough to keep readers loyal to the story. Though written from the point of view of Bella, the female protagonist, readers are introduced to vampire lore and legend through her experiences and interactions with them. Meyer used these vampire stories from folk lore and myth to establish a context and suspend disbelief. There lies the strength of Meyer's Twilight.

Put away the garland of garlic cloves, crucifix and coffins. Meyer's vampires struggle to fight their demons to achieve a degree of humanity and sanity too.

Sadly, very little of this internal and external conflict emerged in the lives of the characters. Too much romance was invested on Bella and Edward. Though, their pairing proves to be spunky and fun as their dialogues are peppered with humor and dramatic irony. Still, Meyer’s dialogues and conversations of the two heroes were far from Rowling's wit or Zusak's poetic prose.

Withholding these layers of emotional and psychological unfolding of the characters must be intentional so that, readers would have a lot to look forward to in the next two novels. If only for this, then I’m in it for the ride. Carlisle is enigmatic and Alice is a character to be reckoned with. I’m also expecting to know and understand Edward’s motivation for turning down Bella’s challenge to make her one of them. She gets a chance at immortality but her vampire lover denies her of it. I want to see her grow or transform in the succeeding sequels.

So it seems that Twilight is not the main meal. It is but an appetizer. But questions in my mind remain. How did she take care of her characters? What human depth and profundity could Meyer offer her excited readers?
Thoughts in action by Zarah C. Gagatiga at Thursday, August 21, 2008 No comments:

What do I get from blogging?

This blog has had good reviews in the past and once in a while, it gets linked to online directories. SLIA has been featured in a few blogs as well and I have had my share of plagiarism issues. But this email from Michael McWade is the most surprising yet that I get from blogging.

I am writing to you from the city of Nanaimo , on Vancouver Island
in the province of British Columbia in Canada .

From your web sites I see that you might be the person that can help
me get some very important information re: education for a child in Pasig City .

Mr. McWade is from Vancouver, Canada and he found me out online. I did reply as ethics would dictate. I'm still smiling at the thought of this unusual and amusing online phenomenon.

Aside from the Canadian query, I also got an invitation to join a social bookmarking site from Mabeline Lee of SocialMatic.

I've come across your site through
your profile at MyBlogLog. I felt that your site
http://lovealibrarian.blogspot.com/
provide interesting and useful contents to online users. Hence, I would
like to invite you to join the Socialmatic network, and hope you can
share all your favorite bookmarks online through SocialMatic.

In an online environment, people who are worlds apart meet to flavor and enrich the global community.
Thoughts in action by Zarah C. Gagatiga at Wednesday, August 13, 2008 No comments:

There is this bit of good news from PBBY board member, Neni SR Cruz, in her article on 70 more Library Hubs to grow in Cebu, Makati and Muntinlupa. DepEd has apparently approved the posting of a licensed librarian in public schools --

This move by the DepEd cast a ray of light for the development of Philippine public school libraries and in effect, the possible growth of libraries as reading and learning centers . If it is a sign that DepEd has finally recognized the law (RA 9246) and the role that librarians play in the improvement of the Library Hubs, then hope springs eternal indeed. In the middle of all this, I could not help but look for any involvement by professional library organizations or schools offering Library & Information Science. It seems that, if they have any contribution to this happy news (that took years to fulfill), then librarians and teachers of Library & Information Science are a humble and quiet lot.

Or, it only goes to show that there are plenty of people and organizations who are bent on building libraries so children could be given access to books and reading materials. It does not matter anymore if they come from the library profession. It takes a community to raise a library.
Thoughts in action by Zarah C. Gagatiga at Saturday, August 09, 2008 No comments: 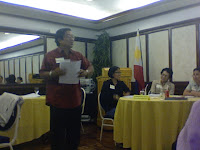 Last July 25, 2008 at Club Filipino, an assembly of selected (Philippine Accrediting Association of Schools, Colleges and Universities) PAASCU accreditors convened to revise the survey form used for accreditation in the Grade School.

I was invited to join the team of librarians who revised the survey form. Along with Mrs. Del Hernandez (Ateneo Grade School), Mrs. Gloria Melemdrez (San Beda Taytay, Rizal), Mrs. Sonia Reyes (Assumption Antipolo) and Mrs. Normita Moneda (Malate Catholic School), we thoroughly went over each area and item of the survey form for school libraries. The proposed changes in the survey form will undergo another reading by the commission before approval. Hopefully, an improved survey form will be used next year by the accreditors.

You might be wondering where the need for revision came from. As everything else in this world, change must be recognized to adapt with the times. The room for improvement is the biggest one in the house, besides. The improvement of the survey form could lead to better results of the accrediting process and thereby, further help school libraries reach standards and possibly surpass them.

On a personal level, taking part in the revision process was both an honor and a privilege. The assembly was composed of seasoned and experienced accreditors from PAASCU accredited schools. I met, once more, my first chairperson, Dr. Cynthia Arcadio (Assumption Antipolo) and friends from accreditation work. Most of them have seen and witnessed highlights and low-lights in their years of service to basic education. But they have endured. They have aged in wisdom and in grace.

There is a good way to growing old.
Thoughts in action by Zarah C. Gagatiga at Saturday, August 09, 2008 No comments: