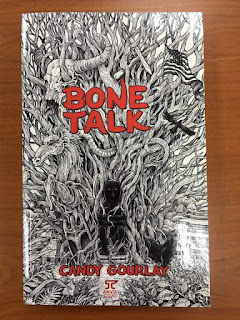 Bone TalkCandy GourlayAnvil, 2018Bone Talk is the story of Samkad, a young Bontoc boy at the cusp of manhood. His journey towards becoming one is a thrilling and heart breaking adventure since the setting of the novel happened at a time of conflict and change. It is 1899 and the Philippines has entered a war with the United States of America. His village in the Cordilleras is not spared of the cruelty of invaders. Though, the opportunity to learn from a friendly stranger presents itself. This coming of age story has a lot to tell, and teach, about identity, honor, subversion, obedience to customs and traditions and the gray areas in between.

Candy Gourlay once again dazzled me with her humor, wit and storytelling. I literally laughed out loud at one point when she started a chapter with this line, ...no talk of my manhood, after a series of action filled narratives. This is Samkad speaking and there I find the typical teenager. Irrational. Emotional. Impulsive. Self centered. I remember myself at twelve years old during the height of the People Power Revolution. I worried about my grade school graduation. Never mind if tanks and soldiers were moving and marching on EDSA. I need to graduate by March!

And then, there is Luki. Irrepressible and persistent, she is Samkad's best friend. It is through her that social class and the roles of Bontoc women are presented. How she defies and disobeys them not because she is a bad girl. Luki is smart and perceptive, protective of her family and friends. She knows who she is and where she belongs. These are all evident in the dialogues she has with Samkad implying that, even girls or women, can fight for the people and the place they love.

This is why I love reading Candy Gourlay. She is capable, with great effect, to show her characters as they are: strong yet flawed, willful but yielding, good and bad. She does so in situations that test these characters. She makes use of images, symbols and metaphors. A music box and a book as gifts from Mister William. A gun and camera as tokens from Colonel Quinlan. This literary technique opens up discussions of a larger scale.

For one, these colonisers' intent and interests can be further fleshed out through a comparison of the objects they gave the Bontocs. What do music and books represent? What are guns for? How powerful are photographs? By bringing these objects in the novel and planting them at well selected spots or parts in the entire narrative, I thought about the ways we were subjugated. They differ in function but were used to colonize just the same.

Ms. Gourlay claims that Bone Talk is not history. True, but fiction can lead readers to a broader understanding of other disciplines and life lessons embedded in the material either intentionally or otherwise. In the end, I realized, that while Samkad earned his rightful place in the village, it is his father who learned a great lesson as well. This for me is the most beautiful part of the novel.

So, go and read the book. Find a copy. Buy or borrow! Do not miss out the wonderful discoveries and insights you can take away from the novel.

Rating: 5 Bookmarks
Recommended: Grade 5 and up

Thoughts in action by Zarah C. Gagatiga at Tuesday, January 15, 2019