Illustrator of the Month: Tinsley Garanchon 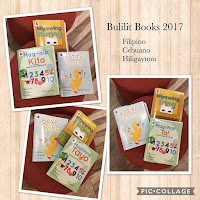 The blog's Illustrator of the Month is Tinsley Garanchon. She is the illustrator of our upcoming books, the Bulilit Books, published by the Nutrition Council of the Philippines Publishing Corporation (NCPPC).

1. How did you approach the illustrations for the Bulilit Books?
Since these are revised versions, the challenge was to create a modern approach yet retain something familiar to all the readers, local touches such as landscapes and interiors. Also, keeping the art in continuity. Timeless in a way.
2. What medium are you most comfortable using when illustrating books for kids?
Digital. If given an opportunity for art’s sake, I'd like to try traditional sometime.
3. As an Inkie, how does the organization help you grow as artist and as a person?
The profession of an illustrator leads you towards a solitary lifestyle but there are times, it's also helpful to have a set of like minds who share the same dreams and goals that can help and support you.

The organization’s direction is to keep this presence known that there is a group gearing towards the progress of children's book illustrators in the local and international scene.
4. Five art works that inspired you to illustrate for kids.

Nila Aye
An illustrator, hailing from the UK. Nila is the epitome of  retro.  Her bright, graphic illustrations which appear in various magazine and publications gives a nod to colorful, retro works.

Lorelay Bove
Found her works by chance online. Not only she works in the animation industry, she also worked with book illustrations where I was drawn into her works. Bright, colorful, flat and retro.
She also has an interesting background story. Lorelay comes from Spain, her dream was to work in Disney Animation and guess what, she did! Her personal story also inspired me to believe.

Neysa Bove
Her works have some similarities with her sister, Lorelay. But what draws the line to distinguish hers is the focal point of her works is the character in the artwork which has a feminine and more whimsical approach to it.

Dric
Found an illustration of Dric’s in an art book which featured illustrators from South Korea, China and Japan. What had me look up to his work was his choice of colors and before, I wasn’t as adventurous in exploring various palettes from vivid hues or pastel tones. Unlike now, I would try to try different color combinations and  see how would it set a tone for an illustration.

Mary Blair
As a child, I had childrens’ books from Disney. When I got older I was able to learn more about this one illustrator that stood out as an influence. Mary Blair did a lot of visual development during the earlier years of Disney films, she also designed the look of an amusement ride in Disneyland which we know as Small World aside from taking in other illustration jobs in publishing and advertising.