Teaching Resources and Readers' Guide: Rebel Of the Sands 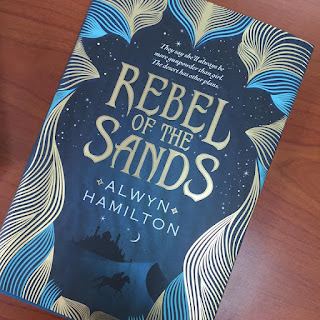 Rebel of the Sands by Alwyn Hamilton (Viking, 2016) is one of the books that Zoe and I read last year that really got us so excited that we can't wait for the next book. The good news is, Traitor to the Throne, the second book in the series will be out in March 2017. I have placed my advance order on Amazon!

While I wait for its release and launching, here are resources for readers, young and old, that may help bridge the long wait for book 2. The curated list of links may also serve as teaching resources for upper middle grades to high school levels. May these materials be of assistance to book discussion groups, school librarians, teachers and parents who are developing units for the classroom or in a homeschooling learning environment.

After reading the book, ask the reader to write his or her own thoughts and feelings about it. The write up doesn't need to be a long  book report or review. Start simply with two questions: what you liked and what you didn't like about the book. If these questions are too broad, make a handout that identifies the character, plot, theme, setting, problem and solution. Have the reader fill this out. Save this up in a journal. This can be used as a guide for the reader during book talks or book discussion sessions.

Check these links out for context building. These short readings, infographics and images may help in comprehension before reading, during reading and after reading the book.

The world building in Rebel of the Sands is akin to that of Middle Eastern geography and history. Review maps, a sultanate's hierarchy and middle eastern mythology.

Two themes that Zoe and I talked about after reading the book were freedom and revolution. Amani wishes to be free from her uncle's cruelty while Jin dreams of sailing away from the desert and turn his back on the revolution. And so we asked ourselves:

What does it mean to be free? Are revolutions worth dying for? To what extent is a revolution relevant, personally and collectively? When do you fight and defend the self and the motherland?

Where we found some answers, but reading them prompted us to ask for more questions.

The Philosophy of Freedom Groundwork for the reader to explore ideas on freedom and its many aspects and consqeuences.
History Today: Waves of Revolution A historical perspective that leads the reader to see patterns and cycles in humanity's social struggles to be free and its quest for power.
Inside Revolution: Why do revolutions happen? This is my favorite, so far, because this was made by a grade 10 student as a Personal Project. Being a school project, the author notes his references and provides a background on his interest about the Syrian crisis. Revolutions, real or fictionalized, have an impact in the lives of young people.
BBC News looks at Freedom's many forms and manifestations  an interesting video that can spark deeper and more comprehensive discussions on freedom.


* Poetry - write poems that celebrate freedom or lament the lack of it
* Picture Collage or Photo Exhibit - create a collage or a photo exhibit on the effects and consequences of revolutions
* Music and movement - stage concerts where kids can sing or dance to express one's freedom; watch a play or musical that touches on these themes
* Curate articles and commentary discussing current events that affect our freedom
* Long term writing project: Choose a revolution that happened in the Philippines and investigate its success or failure.

All woman and springtime : To survive the journey to freedom, all they have is each other / by Jones, B.W.   London : Phoenix, 2013

All woman and springtime : To survive the journey to freedom, all they have is each other / by Jones, B.W.   London : Phoenix, 2013

The Evils of Revolution : What is liberty without wisdom and without virtue? / by Burke, Edmund   London : Penguin Books, 2008

Inside WikiLeaks : my time with Julian Assange at the world`s most dangerous website / by Domscheit-Berg, Daniel.   New York : Crown, c2011

Thoughts in action by Zarah C. Gagatiga at Sunday, January 22, 2017