The PBBY Alcala Prize Winner of 2016 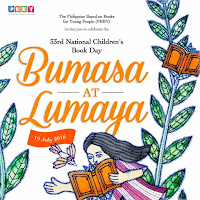 The Philippine Board on Books for Young People declared Mark Lawrence Andres as Grand Prize Winner of the 2016 PBBY-Alcala Prize. Andres is a graphic designer of And a Half Studio and has illustrated three children’s books for an NGO. He is also a member of Ang Ilustrador ng Kabataan (Ang INK), a professional organization of children’s book artists.

Both Andres and Ochotorena will be awarded during the celebration of National Children's Book Day on July 19, 2016 at the Cultural Center of the Philippines.
For inquiries about the contest, contact the PBBY Secretariat at telephone number 352-6765 loc. 203 or e-mail pbby@adarna.com.ph.
Thoughts in action by Zarah C. Gagatiga at Monday, June 13, 2016