The Sa Aklat Sisikat (SAS) Teacher Training Workshop (TTW) in Capul, Northern Samar has to be the most adventurous TTW yet.

The team for this TTW is composed of Cats Alcaraz, Reading Coordinator, Jojo Pagsibigan, Group Facilitator, and yours truly, Master Trainer. We started out early for a flight to Catarman, Northern Samar via Cebu Pacific. I am always awed at the beauty of blue. Sky and sea. Flecks of white clouds peppered the sky and the sun loved us back. When the plane touched ground, I nearly fell on my knees in homage. 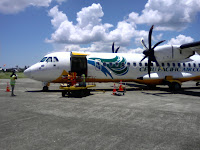 This is my first time to reach Visayan soil. Though married to a full blooded Waray, I felt strange to be in an island far away from Luzon. Hearing the dialect of my in-laws did not help the feeling of alienation. Yet, the adventurer in me surfaced when Cats asked where to have lunch. I dropped the proposal of eating in the nearest Jollibee, the most popular fast food chain in the Philippines. Yes, Von Totanes, every nook and cranny of the Philippines is littered with Jollibee. Very soon, the President might just proclaim Jollibee as the national insect of this banana republic! Hey, if Carlo Caparas is National Artist, it's not impossible for Jollibee to join him in GMA's roster of the president's national choices.

Going back to Catarman, we ate at a local restaurant named Ron-Ron. Move over Lavander Brown! We Filipinos know our nicknames to heart but we know better when to change consonants to call those we hold dear. The lunch was superb! Simple but superb! We ordered big shrimps. Hilabos swimming in buttery sauce with pepper and ginger. The fish tinola was delicious, but a film of oil layered on top of the swordfish in the soup. It stuck in the lips and around the mouth that eating it was like applying grease in the face. The swordfish was meaty and that salvaged the dish. And of course, the kinilaw na tanigue was the star of our lunch date at Ron-Ron! Ang SARAP! I suddenly missed my mother-in-law who could make the best kinilaw na tanigue in our part of the metro. Lesson learned -- when in a new town, eat the local food to experience the flavor of its culture and way of life. Ginger, pepper, onions and garlic. The Warays know how to mix these falvors well with a dose of sweetness using coconut milk or sugary butter. It shows in their disposition and life style!

The hearty meal was immediately digested an hour and half when we reached Allen, Northern Samar. The jeepney ride was long and hot that riding the boat to Capul excited the three of us. It was a relaxing experience to be out there in the open sea. The surface of the water was coated with cellophane. Mt. Mayon seem to stand like a guardian in the south. San Antonio, an island north of Capul, was a mysterious mass of land. It looked dark green from a distance. Pirate ships and galleons patrolled these waters for centuries. And here we are now, visiting Capul like missionaries of long ago.

Finally, we hit dry land in Capul. I tell you, reaching the island was not the end of the journey. The scooter ride beat out the plane, the jeepney and the boat! I was squeezed between manong driver, my luggages and Jojo Pagsibigan on the scooter going to our rented beach house. It was like riding the caterpillar at your local carnival. My last motorbike ride was with my father twenty-eight years ago. No point of comparison. Let's just say that I trust my father when it comes to driving a motorbike.

At the end of the day, we waded in the beach till twilight, enjoying the warm water and white sand at low tide. It was my first to see and touch see grass. The three of us had other interesting discoveries. I'll save them for tomorrow's post! Promise!

It's pretty late. I need to sleep or else have the electrically powered lights run out on me. There are small lamps powered by solar energy around the house, but a city slicker like myself worships the power of MERALCO. I miss the hubby. I miss the kids. Tomorrow is another day.
Thoughts in action by Zarah C. Gagatiga at Friday, August 21, 2009