Author of the Month: Rhandee Garlitos

I have featured and wrote about a good number of Filipino writers for children in this blog in the past. Turning five this year prompted me to make it a regular feature. So, every month the blog will have an Filipino author to meet and know about.

For this month of April, I've asked Mr. Rhandee Garlitos to answer five questions that tackle his experiences as a writer for children; the books he has published; the recent book that won him the prestigious Salanga Prize last year; and the creative process involved in his writing.

I hope you all enjoy his honest and sincere disclosure.

1. When did you start writing for children?

Before I started writing literature for children, I first became an interested reader of children’s books, and this goes all the way when I was still a young two-year-old kid. I was fascinated not only with the pictures but also with the words, trying to mouth them or when my grandfather read them to me, listening to every word that he says. Though I started writing poetry and essays when I was still in grade school, the topics I was writing about were way too “heavy” — fear, romantic love, death, sadness — something that I continued doing until I finished high school. 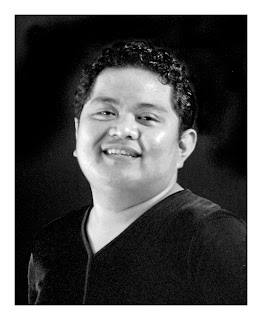 It was only when I was in college that I started writing literature for children, when I became a staff member of Malate, the literary magazine of De La Salle University. At the time, Rio Alma, who would become my mentor in poetry and a major influence in my writing, visited DLSU for a lecture. Adarna House, which he founded, was selling his poetry books and also children’s books that I grew up with. I started buying children’s books and wrote my first attempts to write children’s stories, with the aim of getting them published at the literary magazine. And when an announcement for a children’s book-making contest sponsored by a big publishing house was posted on one of the school bulletin boards, I decided to join, mainly out of curiosity and the experience. I asked an art staffer of my magazine to illustrate the story I will enter for the contest. Luckily, we won and months later, the first book I have written, Ang Paglalakbay ni Pepito Piso, got published in 1996, when I was only 18 years old.

2. What was your inspiration in writing May Higante?

My latest book, May Higante sa Aming Bahay, is a personal two-year writing journey towards coming up with a story that glorifies and demystifies the Filipino father. In a society where the Filipino mother is always put in a positive light and the Filipino father relegated at the background, I decided to write a story that could possibly break ground on the way the Filipino child considers an important figure in the family. The father in this story is a sketch of the father-figures in my life: my uncle Lenito Gatchalian who was a tall but gentle surgeon and loving father, and my mentor, Virgilio S. Almario (aka Rio Alma) who, despite his imposing credentials and strong voice, is a father to many Filipino young writers.


3. Describe the "creative process" you went through when writing May Higante. Did you undergo the same experience writing your other books?

It was a story that was never easy to write, mainly because of my detachment to my own father. Our relationship was like that of Shiva and Ganesh: my father is so absorbed with his own thoughts and problems so the rigors of raising a family fell to my mother, who became very over-protective and defensive, to the point of sometimes being insecure and overbearing; I was the stubborn child who protected his mother so we took all the attention and love she could give to her husband. Nevertheless, he was the guiding light that made this story possible. Too bad that he passed away not seeing this book coming to light.

Compared to my other work, it was written several times all over in a span of two years. I was carrying the idea in my head for a long time, struggling to get it done but trying to find a way to make it a fun story to read; that is, I want it to become a profound tribute without being a tear-jerker. I think that watching my own daughter growing up helped me understand the character of the father in my story. I put myself in her shoes and how she imagined me to be — a “giant” of sorts. I was literally the tallest and biggest figure in the family, my height and weight an imposing feature of me that I used as a detail to the character of my story. The rest of the details developed as time went by, but only got finalized in print in time for the deadline of the PBBY Salanga Writers’ Prize.


4. How many of your stories have been published into children's books and which is the most memorable?

I have written and translated several stories, but I was fortunate that almost all of them were turned into children’s books. Each of these books has a particular special place in my heart because I think of the rigors that come with their creation.

My first book, Ang Paglalakbay ni Pepito Piso, was memorable because it was my first children’s book. I was only 18 years old and in college when it came out in 1996. Although the story’s characters were dated, the lessons of the story are timeless — courage to discover what is new, ability to pick one’s self up from tragedy, and being rooted to your family and community.

My popular book, Chenelyn! Chenelyn!, was easiest to write. I finished writing it on the computer for only 30 minutes. The funny circumstance with this story was that it was my mother, more than anyone else, who inspired this story. I was frantic and stressed out while coming up with a story to beat the 5 p.m.-deadline for the 1997 PBBY Salanga Writers Prize, having decided to change my entry at the last minute. I kept on asking her to get things for me (something to drink and eat, a pillow, etc.) and she gladly obliged to my requests. Then I thought, why not write about a story about a maid who could do all these things and make it appear so fantastic to her ward? It was followed by ceaseless typing and after that, rushed to the PBBY office where I made it just in the nick of time, the last entry accepted for that day. The rest, as they say, is history.

I wrote Mga Lihim sa Gabi ni Ruming in verse form because of the influence of poetry in my creative writing experience. Most of my stories were written not in paragraph form, but in sentences broken into lines that simulate the appearance of a poem. This book was written out of a fascination with an image. At that time, I was still at the office at 9 p.m. when I saw the silhouette of a cat on one of the windows. I thought, what if I write about the night habits of cats? The name of the character was inspired by a cousin who frequently goes out at night, usually to drink with buddies or meet his girlfriend.

5. As a writer for children, where do you see yourself ten years from now against the backdrop of Philippine Children's Literature?

I see myself still writing books for children, enjoying the process along with fellow children’s book writers and friends, and inspiring and teaching those who would like to pursue the craft through talks, writing workshops and school visits.
Thoughts in action by Zarah C. Gagatiga at Tuesday, April 20, 2010

More of this T.Zee, thanks!

Was able to meet Rhandee Garlitos this afternoon when he guested sa isang ANC show here at abs-cbn! He is so cool and so down to earth! isang henyo at magaling na kuwentista! mabuhay at sana'y marami pa sana siyang maisulat na kuwentong pambata!