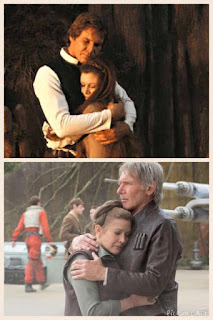 With renewed hope, my family and I watched Star Wars: The Force Awakens. We were not disappointed. We enjoyed the movie because, really, who cares about Anakin Skywalker's ascent to Jedi-hood and his descent to Darth-ness? Well, OK... I sound cocky. But really, a better script could have done the prequels justice. So, when the Force awakens, 30 years after Return of the Jedi my husband and I are more interested to know where Luke, Leia and Han left off. We know there were books, comics and online games on the saga, but, the movie experience is a stand alone entertainmnet fare we both looked forward to.

I like Rey, because, finally, a girl Jedi coming into terms with herself and her powers. This one is for my daughter. I like Finn, because, I have always wondered what goes on in those storm troopers' mind. I like BB-8 because he is fast. Maz Kanata is the closest thing I can attach my Yoda fascination to and it seems she holds the secret to why the Luke's light saber was in her care, in the first place.

I love how TFA paid homage to the Millenium Falcon, to Han and Leia, to Chewie, to C3PO and R2D2, coming back to life. The force is so strong it can resurrect dormant droids! I thank JJ Abrams for restoring my childhood. Though, Han Solo died at the end of this episode, I look forward to many things: how evil is Kylo Ren going to be since his act of murder is beyond redemption; the potential of Rey's friendship with Finn; the secrets that Maz Kanata will reveal; and Luke, oh Luke. You better make up for Han's demise!

And so, as we dread the coming Metro Manila Film Festival, Star Wars: The Force Awakens has given me a good amount of cinematic happiness despite the death of my childhood crush. Such is life that joy and sorrow live side by side.
Thoughts in action by Zarah C. Gagatiga at Thursday, December 24, 2015