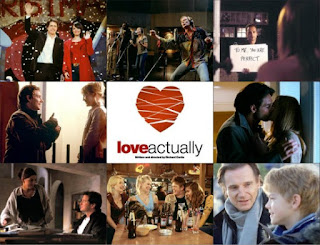 What is not to love in a movie that has everything and everyone? Collin Firth. Hugh Grant. Emma Thompson. Alan Rickman. Liam Neeson. Martin Freeman. With cameos by Rowan Atkinson and Claudia Schiffer. Directing this ensemble cast, with a script that weaves in and out of these Londoners at Christmas is impressive. Love is in the air at Christmas and even after the season. Indeed it is all around, including heart break and the misfortunes that come with loving.

Harry and Karen (Alan Rickman and Emma Thompson): Theirs is a test of fidelity where Harry flunked big time. Emma Thompson's Karen is the ideal wife and this makes the cheating husband the absolute villain in the relationship. Her control and composure in keeping things together for the children is a situation that many couples can relate to. That they shared a meaningful look at the end of the movie, in Heathrow Airport, says a lot.

Jaime and Aurelia (Colin Firth and Luica Moniz): Love conquers all, including barriers in language. Jaime had to take lessons to speak Portuguese. He ran after Aurelia and proposed. One of the funniest moments in the movie.

Karl and Sarah (Rodrigo Santoro and Laura Linney): Love, no matter how intense, does not always work out the way you want it. This makes you think of the "one who got away."

The British Prime Minister and the President of the United States (Hugh Grant and Billy Bob Thornton): The British PM kicked the US President's ass. All for his love of country. Didn't he become bolder at pursuing Natalie after that episode with the press? Love can do that!

Sam and Daniel (Liam Neeson and Thomas Broadie-Sangster): Amazing how a father can show his own brand of loving to his stepson. Watch Titanic together! Support him all the way to run after the love of his life, because, really All I want for Christmas is You!

Of course, in between are the cute story lines on friendship, on moving on, and finding love in places you least expect it. It's Christmas and it's a romantic time of the year!

Thoughts in action by Zarah C. Gagatiga at Monday, December 21, 2015