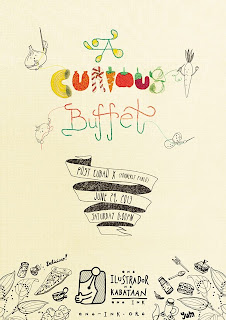 Pots and pans, teacups and spoons are the stuff of the everyday and the normal. We use our kitchenware and utensils almost unthinkingly - picking them up, using them, washing them down over and over again. Kitchen and table utensils are the tools of our daily domestic routines and are steeped in the matter-of-factness of life. Spoons and teapots can be some of the most unremarkable things in the world. Utilitarian and ordinary as they are, one may think that they are far removed from the wonder of the visual arts.

But art can exist in everyday things. In this exhibit, Ang Ilustrador ng Kabataan aims to juxtapose the common kitchen utensil with the magic of art. Factory made utensils give way to artworks made with hands. The artworks on display will use kitchen items and utensils as starting points for sculptures and paintings. Objects that were originally intended for cooking and eating will be reassembled, recombined, repainted and transformed to items for pure visual enjoyment.

In the end, when all the artworks are assembled, the intention is to create a collection of desserts and treats of a different sort for both the eye and the mind.