Movie Review: Rise of the Guardians

What do Santa Claus, the Tooth Fairy, the Sandman and the Easter Bunny have in common? They're all guardians. Guardians of children from all over the world. It's a conceit too big to make it believable. The magical visuals and metaphors used in the story helped me suspend my disbelief.

Thanks to high tech CGI animation, the film's ambition to make magic worked wonders. What appeared real to me: the golden strands of the Sandman weaving dreams on top of sleeping heads of children; Jack Frost producing ice and icicles on everything he touches and breathes on; the Boogeyman's sinister shadow that casts doubt and fear; the black mares with gleaming eyes depicted as nightmares that snuff out dreams of gold. DreamWorks did its homework so, as far as animation is concerned, they got the prize in the bag. 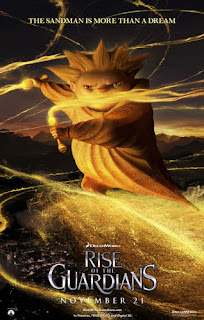 I've nothing much to say about the script as I find the sub-plots cluttered and a few bits misplaced. For example, the elves and the yetis. They're all adorable but too much of them were used as comic relief. Perhaps, this was an attempt to lighten a story that's too philosophical for kids in the preschool age?

The movie is really meant for adults, like me, who've had their share of lemons thrown at them by life. Childhood is magical and wonderful. Growing up breaks the magic and wonderment. Children are trusting and honest. Grown ups operate on deceit to get what they want and are more fearful of their evil, if not, imperfect selves showing out for others to see. Such contradictions were made palpable through the use of childhood folk lore and images that we're familiar with - Jack Frost, Santa, Tooth Fairy, Easter Bunny, the Sandman. Each represent a virtue or an aspect of childhood: play, wonder, memories, hope and dreams. Stuff that children believe in. Stuff that adults find once again in the children they care for and love.

Apart from the cluttered script, the movie left me with a big lacuna on the Man on the Moon. I'd be looking up on William Joyce's novel from which the movie was based on. And this is actually a good thing, thinking about it.

Rise of the Guardians is a feel good movie. I'm glad I'm a parent and that I work with children and teens. If not, I'd have chucked the movie out the window as an attempt to water down Gaiman's conceit in American Gods.