Of course. I did not miss Peter Jackson's The Hobbit. I watched it with my family last weekend and weeks before, I reread The Hobbit to refresh my mind. Now I feel I need to read The Silmarillon to complete the Tolkien experience. It looks daunting, but I will try. So here goes my review. 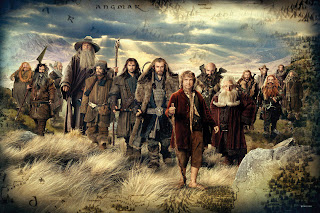 I am impressed at the way the script was written. There were events and elements of conflict bigger than the dwarves' quest inserted in the original storyline. Take for example the inclusion of the scene of the White Council. It was not in the book, but, putting it in the movie gave me a bigger picture of the One Ring saga.

The heirs of Durin were bent at taking back Erebor. In the background, a familiar evil is on the rise. Bilbo's founding of the ring was merely a beginning to the end of Middle-earth's Third Age. I appreciate this effort of Peter Jackson and Philippa Boyens because, it bridged The Hobbit to LOTR besides, it justified Gandalf's constant disappearances from the compamy. Now I see the connection between Bilbo and Frodo beyond the family relationship. What the older Baggins began, the younger one ended. It is going full circle, achieving closure and completing a story. This is a recurring cycle in the books which the movies deftly and appropriately handled. Tolkien knew his history and his myth. Jackson and Boyens took these tradition to movie making and respected the grand material of Tolkien.

Perhaps, to some movie goers, using this format appeared boring and tried. But I take Tolkien's The Hobbit and LOTR as stories brimming with life lessons and not mere entertainment. Jackson interpreted these life lessons through his art, which is movie making.

I particularly liked the conversation between Gandalf and Galadriel when the council meeting was over. Cheesy, as some movie goers and reviewers called it. To me, it amplified one of the many themes of the book. We fight evil by doing small deeds one day at a time. This is more difficult to do, really. How can you choose to be good or to do good every day in a world that is swimming in an ocean of corruption and selfishness? Before battling others, one battles with the self. And this happened to Bilbo during his attempted escape from the dwarves leading him to Gollum's lair. Indeed, the yearning to go in an adventure is an opportunity. But why leave a comfort zone? I've often asked myself of Bilbo's motivation of going on a quest. When Bilbo told Thorin that his purpose is to help them bring back their home, he's become the unlikely hero so charmingly portrayed by Martin Freeman. He is perfect for the role. Unlike Elijah Wood's insecure but determined Frodo, Martin Freeman's Bilbo is smart and witty. He fumbles too but his empathy oozes out and this makes his rendition such an endearing character.

As for Thorin Oakenshield, darn it, I didn't expect a dwarf to look fierce and sexy at the same time. Richard Armitage's portrayal of the exiled prince is a fantastic mix of loss, bitterness and pride. Not the perfect, unblemished hero but a leader who rises to the occasion when all hope is deemed as lost. 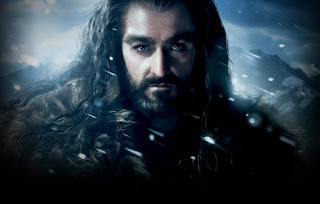 I really have nothing else to say negative of The Hobbit An Unexpected Journey. The production value is several notches higher than LOTR. It's just too bad that I have to wait for 2013 till the second installment, The Desolation of Smaug. I'm excited to hear Benedict Cumberbatch's voice for the fiery dragon of Erebor.

At least, the wait for the DVD or VCD of The Hobbit An Unexpected Journey is only three or four months long.

Thoughts in action by Zarah C. Gagatiga at Thursday, December 20, 2012