It appears that a line-up of literary events for children and teens are scheduled this month of July. Not only are these events for kids and teens, but also, for the adults who create and produce literature for them. Here's the litany -- 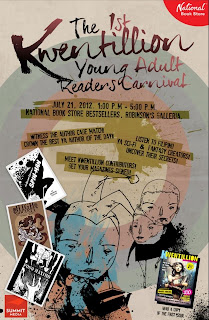 
On the same day, the 1st Kwentillion Young Adult Readers Carnival is scheduled to take place at National Book Store Best Sellers, Robinson's Galleria. The event will begin at 1PM. Paolo Chikiamco of Rocket Kapre blogs about the panel of YA creators who will speak on their art and their craft. I'm attending this event since I'm eager to get Budjette Tan's autograph. Also, the YA Game sounds interesting. Maybe it's something I can replicate in the school library. 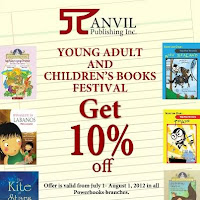 On July 17, PBBY will be awarding the Salanga Prize and the Alcala Prize to Russell Molina and Hubert Fucio respectively. It's the 29th NCBD and I'll try my best to update you all via Facebook and Twitter (live) as the ceremony rolls along. Dean Dina Ocampo will give the keynote address on the theme of mother tongue based instruction. Tarie Sabido, book reviewer and book blogger par excellence will be inducted as new PBBY board member.

And of course, the 2nd Best Reads-National Children's Book Awards will be held at the Mind Museum in Taguig City.

Lastly, Scholastic and Anvil are conducting book sales as I write this. Anvil dubbed their sale as Young Adult and Children's Book Festival and Scholastic promotes their 10th year anniversary with the 10 Deals for 10 Years warehouse sale.