It is July and the PBBY will spearhead the celebration of National Children's Book Day on 19 July 2011. The theme this year is Lolo Jose: Nagbabasa, Binabasa.

Yes, PBBY is taking a full Rizaliana themed celebration this year. With the Salanga Prize and Alcala Prize going to Eugene Evasco and Yasmin Doctor respectively on their laudable story and illustrations that is Rizal inspired, expect that PBBY will raise Rizal from the dead. Prof. Ambeth Ocampo, already a personal friend of the PBBY, said yes to the invite to do the keynote speeh. Venue of the NCBD this year is in the University of Santo Tomas. Rizal themed activities by the Museo Pambata, the CCP and the National Library (all are PBBY institutional members) are lined up till December 2011.

As told in the PBBY annals, the third Tuesday of July is the National Children’s Book Day because it is on this day that Jose Rizal’s retelling of the Monkey and the Turtle got published in London. Is Rizal the first Filipino writer to write and retell for Filipino children? History has it that he wrote and retold folk tales for his nieces and nephews while he was studying in Europe. Whatever is the case, Rizal’s love for books and the written word spills over time and generations. 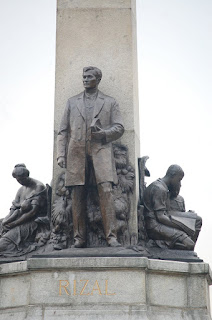 It is not surprising then that Rizal had a personal library comprising of 2,000 volumes. What titles were there? How did he organize his collection? Where are those books now? In Europe, he frequented the libraries in London and Paris. He was impressed when he discovered that the ship he boarded for Europe had a “good and pretty library” (Ocampo, 1960). He dreamt of forming an organization whose purpose, among other things Filipino, was to set up a library and museum of Filipino objects. He had planned of putting up a school in Calamba with Blumentritt as the school director. Rizal was confident that he had developed a library collection large enough to support such a learning center (Ocampo, 1960). What a school leader! Don’t you wish school administrators would do a Rizal?

Indeed, Rizal is a true bibliophile. Rizal, you are my hero!
Thoughts in action by Zarah C. Gagatiga at Friday, July 01, 2011

Thank you Ms. Sarah for the additional input of activities as part of our Library Literacy Program.