From island hopping, we went inland to discover more of Bohol's splendor. The day's itinerary were as follows: Tarsier, Chocolate Hills, Man-Made Forest between Bilar and Loboc, Floating Restaurant on the Loboc River, Baclayon Church and the shrine of Pacto de Sangre. 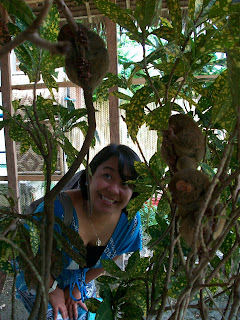 It was a long drive inland but leisurely and relaxing. Our first stop was the Tarsier zoo. Finally I saw them, live! They were so small indeed. They clung to the branches in huddled repose, eyes wide and bulging, fingers wrapped securely on a tree branch. 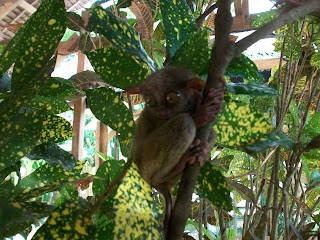 Dianne and I said our goodbyes to the tarsiers. Mang Jerry our driver and tour guide of the day, brought us to Chocolate Hills. The road was paved but windy. It sort of reminded me of Baguio because there were big boulders that flank the road left and right. According to Mang Jerry, Bohol rose up from the bottom of the sea. That's not impossible as all islands are volcanic and most are formed under the sea where forces of water, air, fire and earth combine. See how magnificent this universe is! 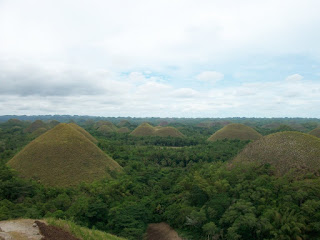 It's no wonder that the Chocolate Hills were formed. It's nature's way of having fun, really. Just imagine if these hills developed into mountains, then, there would have been a mountain range in the Visayas. But no. The universe did not allow it. So now we had a wonder of the world to behold. The hills do look like chocolates as the foliage turns brown in the sun. Dianne was thinking, how come there were no chocolates for sale around? Peanut kisses were a plenty. Perhaps it's time to make a choco-peanut variant as homage to the Chocolate Hills. 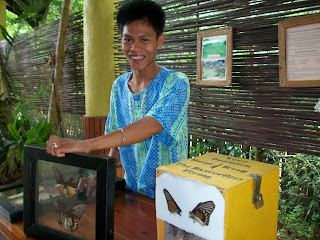 Next stop was the Butterfly Sanctuary at Bilar. We were entertained by Jobert, the guide there who gave us an amusing tour of the place. The butterflies were beautiful. All butterflies in the garden are endemic to Bohol.

On our way down to Loboc, we passed by the Man Made Forest which is five hectares wide. Mahogany trees were planted by students of the Holy Name School of Bohol. They've been doing this for forty years! Dianne was reminded of the US when we stopped for a short while to take pictures. It was a cool spot. 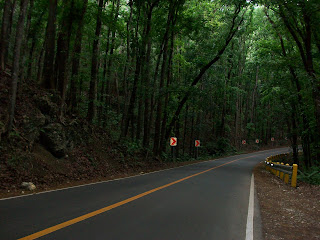 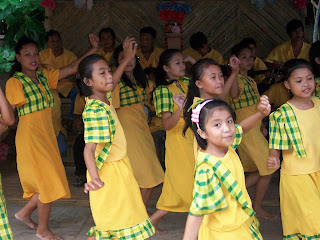 The final leg of the journey was the Baclayon Church and Museum. It is the second oldest church in the Philippines. The Jesuit fathers built it in 1727 out of wood. In time, the Augustinian Recollects took over and renovated the church in to its current state. It's made of coral stones taken from the sea. The adjoining museum is another interesting site and sight. I could not say they're doing a great job at preservation and conservation efforts though. The church was named a national historic site in 1994. With a flourishing tourism trade, the Baclayon municipal government or the LGU of Bohol could at least find ways to finance its restoration, especially the artifacts that has been corroded by the salty sea air. It doesn't help that Baclayon Church faces the sea. 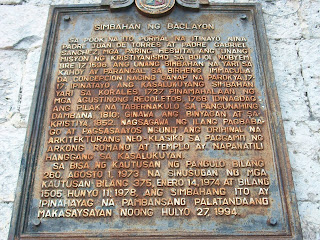 Speaking of care and respect for historical sites, Filipinos need to be educated on this matter. I am embarrassed at the lack of historical pride and cultural appreciation among my country men. Napoleon Abueva, National Artist, made the sculpture of Pacto de Sangre, the one that stands in front of Baclayon Church. Abueva based his work form another master, Juan Luna, who painted the Pacto de Sangre when he was in sojourn in Europe. Tourists would climb up the sculptures and pose wacky faces between Urdaneta and Legaspi. I did not see any foreigner doing so, just Pinoys. 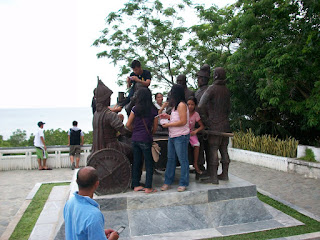 Despite this, the tours and sight seeing in Loboc, Baclayon, Bilar and Carmen were highly educational and leisurely. Now I've so much to share to my own children, the kids I teach and the colleagues I interact with. From mountain to sea, there are so many things that bind these archipelago together - love for family, generosity, simplicity...and a need to know more deeply beauty of these islands.
Thoughts in action by Zarah C. Gagatiga at Wednesday, May 19, 2010