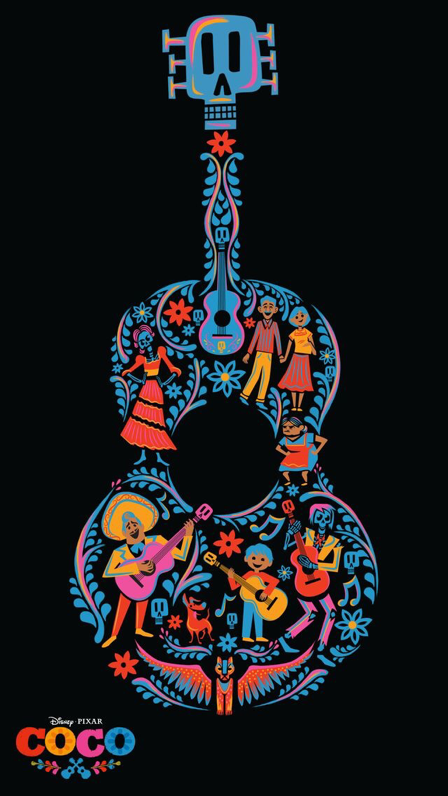 Coco
Direction: Lee Unkrich and Adrian Molina
Screenplay: Lee Unkrich, Adrian Molina, Jason Katz and Matthew Aldrich
Disney-Pixar, 2017
We were able to catch Coco in the cinema this holiday season. We laughed and cried in all the right places. I love it and here are ten reasons why.
1. The music is a focal point connecting Miguel to his past, present and future. The fambam loves music. We all use and play our respective instruments. We know where Miguel is coming from.
2. Remember Me is beautiful but I had the most fun watching Miguel and Hector sing Un Poco Loco.
3. The Mariachi! It is music I rarely hear or listen to but when I do, I love it. To my ears, it sounds so romantic.
4. The Mexican folklore, legends, customs, superstitions, myths and belief system that make up the movie’s platform for storytelling fascinated me. The Day of the Dead, for one, is a celebration of life. It is a time to remember the lives of loved ones that have moved on. In more ways than one, they still affect the lives of the ones they left behind. This is a tradition where significant human experiences abound and the film made use of it really well. The ofrenda, where the photos of the dearly departed was an important storytelling element emphasizing the role of memory. How petals of marigolds, orange and golden, can bridge the dearly departed to their living loved ones. The animal spirit guides that cross over like their departed humans on the Day of the Dead is a scene I found endearing. They too have their own stories to tell!
5. The visual storytelling is amazing! The colors of the animal spirit guides were as lumunous as the personalities of their human counterparts. The paper cut outs that served as a prologue was effectively used. The skeleton shaped guitars suggest Miguel’s entrance to the realm of the dead. And the marigolds! I will nevet get over those orange flowers!
6. Miguel is a charming character and so is Hector. The former is looking for his niche in world. The later simply wants to be remembered. But the way they fought for their hearts’ desires make them heroes in their own right.
7. The plot twist is done pretty well!
8. Ernesto de la Cruz’s character is a tale of his own, and a cautionary one.
9. Frida Kahlo
10. Gael Garcia Bernal
Should cinemas in your area bring back screenings of Coco after the Metro Manila Filmfest, go see it!
Review: 4.5 / 5
Photo source:
https://style.disney.com/living/2017/11/06/lihat-lebih-dekat-dunia-coco-dengan-wallpaper-menakjubkan-berikut/amp/
Thoughts in action by Zarah C. Gagatiga at Monday, December 25, 2017