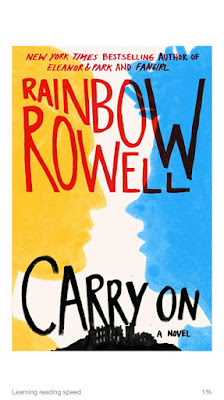 Rainbow Rowell is back with Carry On, a fascinating but sad depiction of magic and man's obsession with power. What struck me was Rowell's narrative on how one's choice of loving can lead to destruction or redemption. So this novel on magic and mayhem is, for me, in its many layers, a love story.

The story of Simon Snow, the Chosen One, and nemesis Basilton Grimm Pitch is tailored after the fantasy canons of old. There is a classical feel to this relationship. Think about the opposites and the good-evil characters of literature, old and new. Add a girl in the mix, Penelope Bunce, and there goes the triumvirate - Harry Potter once more. But, it isn't. It is a stand alone novel despite shades of Potter and Lev Grossman's The Magicians. Is it a combination of both? Rowell's take on the magical and fantasy troupes of this age?

As a fan, I felt Rowell was having fun writing the novel. I'm not saying or assuming that writing this novel had been easy for her. For who am I to say so? But I can tell from the way the characters speak to each other and the way the plot unraveled the secret of Simon Snow that this novel was not easy to tuck away in another novel as a technique to further enrich the story. It has to come out! And out it did! It hit me with a bang right through the heart. Because, apart from being a story of magic and power, of friendship, of desires big and small, it is a story of a mother's love and a father's duty to protect his child.

Carry On is another feather on Rowell's cap. A classic tale of creating something new out of a tried and tested canon. Adorable!