Teachers are in a very good position to spot materials for stories that children can enjoy and relate with. The school environment, with its children coming and going day in and day out, is filled with all kinds of voices waiting to be heard. One teacher, Kristin Canon, was perceptive enough to the voices, little as they may be, that she hears and listens to every school day.

Having listened to a niece's story after school one day, inspired her to write Bakit Matagal ang Sundo Ko. It won her the PBBY Salanga in 2001. 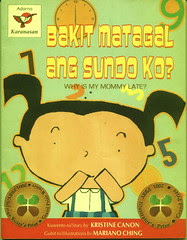 The story started when the school day ended. Roller bags were racing to the gates as students rush home. Yayas and drivers, mommies and daddies fetched their kids one by one but for a little girl who was left behind as her mom has not arrived yet to pick her up. Wrought with worry, the young girl imagined all the possible reasons why her mom wasn't there yet at the school gates. And what fantastic images she conjured in her mind! Mariano Ching lends his playful style of illustration to make this story a reassuring read for the young reader who has experienced waiting for so long by the gates of the school.

Canon wrote in Filipino and magnificently captured the angst of a waiting child. Her own experiences as teacher and mother helped in framing the character's coping mechanism. Her familiarity with chidlren's thought processes was an advantage. In the story, Canon depicted her lead character as a natural dreamer. Aren't all children? They can retreat into a corner of their minds to nurse their suffering mental state. The little girl in the story build on make-believe situations to calm and reassure herself. Upon exhausting all possible imagined reasons, her mother came just in time to prevent her tears from falling.

They say teachers have no time to write with all the work load. With Canon's example, teachers who wish to write and get published better start managing their time well. Who knows, you, dear teacher, may be the next Salanga awardee!

Email ThisBlogThis!Share to TwitterShare to FacebookShare to Pinterest
Labels: mothers