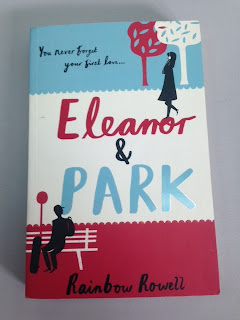 I first heard about Eleanor and Park from Tarie Sabido, book blogger superstar and PBBY Chair. We were in Cebu and she raved about it in the middle of her workshop. I was at the back of the hall and she pointed out to me: "Zarah, you will love it!"

I like it that a Korean American boy is one of the main characters of the story. Park was not characterized as the nerdy Math and Science wizard who fell head over heels in love with a beautiful blonde cheerleader. Instead, he fell for the weird fat girl at the bus and fought for her, not just his feelings for her, but for what is right for  both of them. I call this love.

It's nice to have a rich vampire boyfriend that sparkles in the sun, but at the end of the day, I'll go with the guy who reads comic books; who listens to The Smiths; who is unafraid to have sex with the girl he loves; who'll stand by and defend his girlfriend against bullies, big or small.

More than being a love story, Eleanor and Park is a family story too. It shows how different parenting styles affect the self concept of children and teens. In some parts of the novel, I paused to ask myself how I am rearing my own teens. Rowell's description of Eleanor's relationship with her mother, and the environment where she lives in brush on the issue of physical abuse. It is this external conflict that allowed Park and Eleanor to make a decision that is bigger than themselves.

I can't really think of any. I love Rowell's writing style because it reminds me of Judy Blume, Cynthia Voigt and Katherine Patterson - YA writers I read when I was a teenager. So, I'll be off book hunting for Rowell's other novels.

Thoughts in action by Zarah C. Gagatiga at Thursday, September 19, 2013