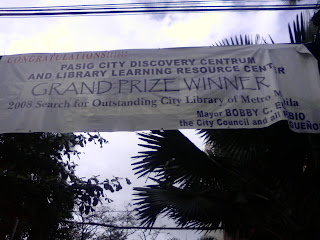 This is the banner that hangs above the entrance gate of the Pasig City Discovery Centrum. It was awarded Most Outstanding City Library. By whom, I still have to know.

The banner has caught my eye since two months ago. It was only last December 23, 2008 when I had the time to take a photo of the banner. The library, at that time, was to close for the day thus, my next visit has to be scheduled. I wrote a post about the city library with photos and you can view them by clicking this link to the Pasig City Library post.

Now, I know New Year is just days away and I don't want to stir any intrigues but, according to a link in the Filipino Librarian, it's the Marikina City Library that was ajudged as the best there is in Metro Manila. Apparently, the link works but there's no write up about it.

The question is, who awarded the Pasig City Library as the most outstanding and the Marikina City Library as the best in the metro? I also wonder what criteria were used. If you have news about such things, please reply via "comment" or my email add (zarah.gagatiga@gmail.com). Such news deserve a buzz in the blogosophere
Thoughts in action by Zarah C. Gagatiga at Monday, December 29, 2008

the title is misleading, but the text acknowledges that pasig was first and marikina second.

Very nice post..Thanks for sharing it

I was looking for something like this and I am so glad that I finally found it.Thanks