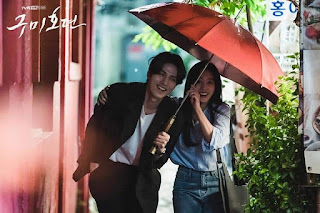 By now, Tale of the Nine Tailed has been compared to Twilight and Inuyasha. There are also parallels to folkloric and fantasy elements of the Harry Potter series. Needless to say, TOTNT has plenty of fantasy and romance tropes found in the aforementioned stories and series.

Lee Yeon, an immortal falls in love with a half blood. He vows to protect her for the rest of his life but tragedy struck (and this is slowly being revealed as the series progresses). Talismans, spells and superstitions, magic and mayhem abound in modern day Seoul as Lee Yeon finally recognized his past love in the reincarnation of Nam Ji Ah. In between are stories of ghost trying to find their way to the light, animals being mistreated, friendships and brotherhood going through the test of time. Oh, and yes, there is the serpent and his minions at his beck and call. Thanks to Ji Ah's blood, an orphan who appears to be the "chosen one", Lee Yeon's nemesis is back in the form of a young boy.

Sounds familiar. Of course. TOTNT is a tale as old as time and while it follows the same tropes of fantasy series we love (except for Twilight), TOTNT remains Korean. I am not only referring to the language, but also to the character of the entire drama thus far. There have been references to Disney favorites as well, but it is Korean in culture, identity and beliefs. You will know this through glimpses of history in the architecture, clothes, food and art. Notice how the dialogues, though subbed in English, express sensibilities that reflect respect for elders, social class and hierarchy. 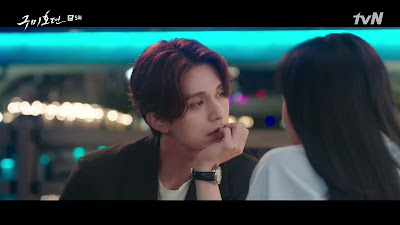 How they have kept this intact for generations is an amazing feat. The same can be said of their Kpop idols. The foreign influence is strong, but the look, the movements and the sound -- all Korean. Ah, I digress.

So, what have I been enjoying in TOTNT despite the parallels and its predictability? Three things namely, the use of folk lore, Lee Dong Wook and men who are rendered helpless because of love.

1. The use of folk lore is well done. We may look at our modern cities as sophisticated dwelling places, but the story of our folks and their belief systems are deeply rooted in our collective consciousness we see traces of it in daily life. We will forever be fascinated by legends and myths. This is why the tropes of fantasy and romance are very evident in TOTNT. It forms the fabric of our lives and we yearn for this at a time when humanity is losing so much of itself in this pandemic. We need to believe again. We need to be amazed. We need to know that we can still hope and live amidst challenges big and small. 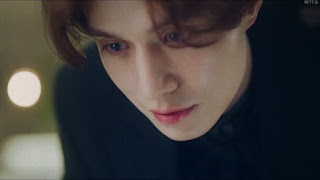 2. Lee Dong Wook. LEE. DONG. WOOK. Shirtless. Wounded. Eating ice cream in his bath robe. LEE. DONG. WOOK. Holding an umbrella for his lady under the rain. Hiding a smile. Definitely enjoying the moment. LEE. DONG. WOOK. Kissing the love of his life on a bridge framed by billowing sheets of cloth only to be challenged in return.

"See me clearly for who I am," Ji Ah says. A look of amusement washes over his face and in my mind, I could imagine hundreds of Filipino viewers sighing and wishing, "Sana all..."

3. TOTNT has men characters rendered helpless in the name of love. Granny's husband is a hen pecked spouse but there is adoration for her in his demeanor. Also, marrying Hades' sister despite his claims is an act of great love if you ask me. Shin Joo, Lee Yeon's servant and housekeeper, loyal friend and veterinarian is brimming with care and compassion for Yu Ri. And Lee Rang... ah. Lee Rang. His anger is love unchanneled. 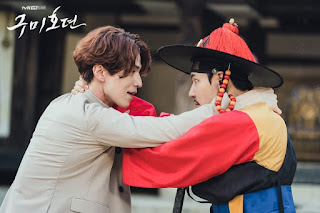 We see so many faces and phases of love in the men of TOTNT. So far, the narrative has been honest, straightforward, silly but sincere, in its rendition of love as an all powerful force in the universe. At a time when there are more men who red tag women for speaking their minds, let us watch men who are unashamed to lay bare their soul for women and the object of their affections.

This is Kdrama, you say. I know.

But life can be stranger than fiction. The answers to questions we grapple in real life can be found in the fantasy and the romantic stories of old.

Thoughts in action by Zarah C. Gagatiga at Wednesday, October 28, 2020