Ajooma Reviews: Tale of the Nine Tailed Episodes 1 and 2 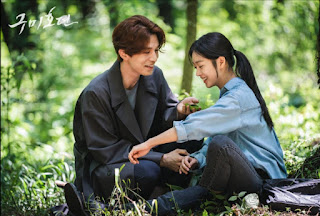 For starters, know that I am a Lee Dong Wook (LDW)fan. I first saw him in essay the role of the Grim Reaper in Goblin and to this day, in my doble vista eyes, he is the most enigmatic and sexy Angel of Death I had ever seen on Kdrama land. We can argue, but let us save our energies for that on another day.

When LDW appeared in the rain with a red umbrella, my heart leapt for joy. It reminded me of Gong Yoo's umbrella scene in Goblin. While other viewers take it as imitation, for me it is an homage. Midway in episode 1, LDW referenced the Grim Reaper since he knows how he is dressed well compared to Granny, the Grim Reaper in the drama. That was a laugh out loud moment. Intentionally done or not, the writer and the director of TOTNT has shown respect for LDW's previous work. The specific scene and dialogue is a recognition of his acting chops and the role that defined his career at the ripe old age of 35. They sure know how to treat and appreciate a senior actor like Wookie.

I promise, I will not leave out elements in my reviews of TOTNT that I find a bit off or downright lame.

So here we go. What worked for me in episodes 1 and 2?

Who are solid shippers of LDW and Yoo Inna? I am one of the many. But yeodongsaeng, the LDW and JBA ship has sailed. They look good together. JBA looks smart and spunky. It is a good match to LDW's deadpan humor and down to earth personality. The characters they play are even more interesting. Let us see how things go from here, but I am rooting for them already.

2. The depth of the acting of all the characters I have seen so far is superb. There are two scenes that are evidence of the acting chops of the cast. In episode 2, when Lee Yeon freezes the river Sando to bid goodbye to Ae Rum, there was only one dialogue from him. It was a killer. Only their eyes speak of their grief. The camera pans to the Grim Reaper Lady who only closed her eyes feeling their pain. That scene speaks volumes. It ushered in so many questions from their past and countless predictions for their future.

The second scene is best shown through these stills. 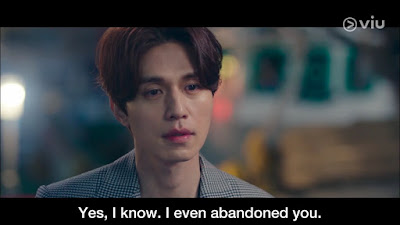 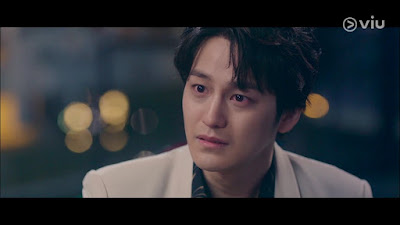 How can these good looking men appear so vulnerable? There is a deep sadness in Lee Rang's eyes. No need for words. The look on his face says it all. Lee Yeon, on the one hand is a deity but he is helpless and at a loss at the forces of the universe. There are rules that even gods and deities could not bend or break. Deals and bets can be made but at a terrible price or consequence. Lee Yeon know this too well.

3. The presentation and discussion of love is nuanced, sensitive and complex. Lee Yeon is weary of the world and yet, he speaks of integrity and keeping his word. He hangs on to finding his one true love but believes in letting go of things that cannot be controlled. His friend could not fathom his old fashioned belief in romance. the happily ever after and respect for rules. Despite it all, he is sticking by him through and through. The owner of the The Snail Bride reminded him that even his show of loyalty to Lee Yeon is called love.

It was a promising premiere, chingu. I cannot wait for the next episode because I look forward to the unfolding of Lee Yeon's intense and complicated relationship, past and present, with Lee Rang. There are many layers to uncover from their conversion by the fishing dock and it would be an interesting to know how TONT delivers the concept of family conflict and the inevitable healing that follows. This is something present in all Kdramas I have watched. Looking back, many of my favorites follow this structure.

And yes, the ending of Lee Yeon and Ji Ah's romance, be it a happy one or negotiable is worth the ride.

It is still a long way from there, I know. I am keeping my hopes up!

Thoughts in action by Zarah C. Gagatiga at Thursday, October 15, 2020